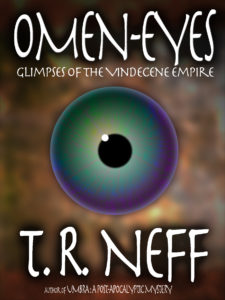 Definitely, My Treat for You!

My first book of the year! Well, not a book, really. A collection of flash fiction, but I digress. I’d been so busy with college work and the other busyness of life that I slacked quite a bit on my fiction. Slacked on writing? Not so much. The revising and such, yes. Very much. In fact, I’ve got several more flash fiction stories in a futuristic setting that I am–crossing my fingers–hoping to release before the year is up, stories I’ve already written in first draft but put off revising until I could get Omen-Eyes out there. I’m not going to name the collection, however, until I am sure which of the stories are going to make it. That said, I am happy to introduce a new (to you, but one I’ve been working on for some time) universe, one in which the fantasy setting has a Roman instead of a Medieval basis. Roman history’s always been a fascination of mine, and while I toyed with historical dramas set in the Classical Roman era, I decided I would have more fun with it and put mythical beings and creatures into a new world I created.  Not that there’s anything wrong with historical purism. In fact, I laud it. Devour it, even. If you want fantastic stories set in ancient Rome, check out Steven Saylor’s absolutely MAGNIFICENT Roma Sub Rosa mystery series. (Gordianus the Finder and Bethesda are two of my all-time favorite characters.)

Omen-Eyes is, however, a foretaste of a longer story about the Vindecene Empire, its people and its enemies. I hope you enjoy. If you do (or even if you don’t) I value honest feedback.

You can get the collection at Amazon or Smashwords.